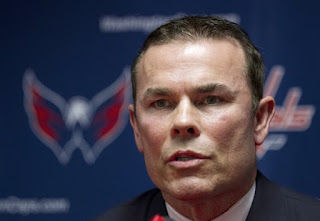 First, it was Dale Hunter. He left and then Adam Oates stepped in. In addition, Calle Johansson just got hired there to assist Oates. Add in Olaf Kolzig to the mix; you've got yourself a nice roster from the 1998 Washington Capitals Eastern Conference Championship team. However, this has been the coaches for the Capitals in the past 12 months (though Kolzig has been there longer as the associate goalie coach).

Is this a good step for the Caps?? It's great for the fans, as the nostalgia keeps on coming from the olden days when the Caps were all about hype, but never having the playoff success for the long-term. While reliving the olden times is something that may be good to some, this whole thing could be a smokescreen for the re-tooling and tinkering that the Caps have been going through for the past couple of seasons.

The fact that Oates is the fifth straight first-time NHL coach for the Caps could be a cause for alarm, regardless of how highly touted he is for the job. That said, there wasn't too many coaches out there on the open market that would have fit what the Caps needed; therefore it seems that Oates was the best candidate with what has out there...at least, that's what most fans are hoping.

While Johansson did assistant coach in Sweden for a season, that was over five seasons ago and may not translate into the NHL game as well as many would hope. The good part about him coming, however, is the learning experience that the Caps defensemen will be able to get it. The guys that could get the most out of it may be the pairing of Karl Alzner and John Carlson-- though Alzner more than Carlson since his game is a more stay-at-home, which Johansson is renowned for in the Capitals folklore.

But I return to the smokescreen reference. It's almost as if the Caps are just parading out the old stars from happier times to lessen the blow when it comes to the performance of the team. While that could just be a wild thought process I'm having-- the excuse of, "Oh, it's a first year coach in his first job and he still has to work out the kinks to his players working in his system" is built in and may be more than some Caps fans to bear if there's a disappointing end to next season.

If this were all work out, it would be a great thing for the organization and the fans; but it's hard to get over the fact that the Caps have been on the cusp of something big-- but something just hasn't been able to get over that last hurdle. The inclusion of first-time coach after first-time coach may not be the thing that gets the team over the top. There's a time for rebuilding and tinkering around with a team's philosophy and to try out new thing. It's not typically the right route for a team who is only a few years removed from being the top of their conference and a President's Trophy winner.
Posted by ScottyWazz at 10:43 AM