How Howson Was Hooped From The Start 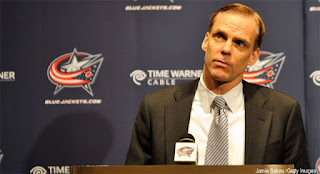 He had to do it. The franchise face wasn't happy and he needed to deal with his unhappiness accordingly. For that, it seems that Scott Howson's future is on the clock-- if it wasn't already. While he didn't get a bad deal for Rick Nash, you have to wonder if he could have gotten more from the Rangers or someone else. The return of Brandon Dubinsky, Artem Anisimov, Tim Erixon, and a first round pick is definitely an investment, can you actually draw people in with a team without one or two big stand-outs??

In any case, the big issue is what Howson needed to do-- because as I've said in the past; he was damned if he did, damned if he didn't. He probably didn't wanted to be known as the man who shipped away the franchise player in Columbus, but with Nash coming out before the trade deadline last February saying he wanted to be deal-- Howson really had no choice in the matter.

Yet, when you look at what he got back in returns and then remember when some GMs said that Howson was asking for the moon and more-- it makes you wonder if Howson really wanted this deal or if he settled. That will probably stream out in time, but as I alluded to earlier-- you have to think that Howson is on the clock with these moves. Not so much because it was a bad deal, but it's not the blockbuster that some were expecting from a name like Rick Nash, especially after the buzz that created from it all.

Then you have consider the deals that Howson made in his tenure and what they really brought to the grand scheme of the team, it seems like Howson has been way over his head from day one. In fact, this is the second captain that Howson has traded-- as he traded Adam Foote in 2008 back to the Avalanche. Overall, the trades that Howson has made have been spot deals that may help in depth and in the short term, but nothing that is ground breaking. In all honestly, the biggest deals the Blue Jackets have really made were maybe acquiring Sergei Fedorov and Darryl Sydor, both under Doug MacLean's tenure. You can make the case for Jeff Carter, but his tenure was unspectacular and he was moved less than a year into it; so it's up to Jack Johnson to make that trade solid.

Which makes me wonder if MacLean wasn't that bad of a GM, if it's the actual location of the team and the onus that the Blue Jackets have that makes them a bad destination for trade recipients and for free agents. This is a team that is very east for a Western Conference team, they are in one of the toughest divisions in the league, and they overall don't have a desirable reasoning for actually coming to one of the last expansion franchises that really hasn't show too much improvement, sans for their one playoff season.

With that as the possible reasoning, the fault really can't lie on the GMs, as their hands are really tied due to their small market appeal. Whether it be the money not being available to shell out to the free agents or just the area not being where players want to go to-- it's a damning thing for the franchise. Especially with trades, they are very underwhelming because the Jackets don't have the parts needed to bring in anyone who will contribute solidly, unless it's a salary cap dump for the other team-- see: Jeff Carter.

Scott Howson did what he could and even if it does improve the team the smallest amount, odds are he will be criticized and would have been regardless of what he got back in return or if he hadn't made the deal in the first place. It was a lose-lose situation and any GM in the position he was in wouldn't have been able to recover from it all. Not just because the franchise player has been dealt, but because the franchise itself couldn't attract the players to compliment the franchise player and entice him to want to play out the bulk of his career there.

Posted by ScottyWazz at 9:27 PM