On the Topic Of....Trade Talks 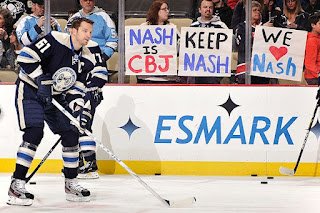 With the drama of Zach Parise and Ryan Suter now over and the free agency tank not on empty, but running on fumes-- it's now time to focus on who is going to be a tradeable asset. This summer seems to have quite the stock of assets that are just begging to be moved for one reason or another. However, the bigger names that could be traded could not be as desirable as the names who are just as comparable; but may have a little more overall upside than the names.

Case-in-point: Bobby Ryan and Rick Nash. These are two guys who many think will be moved this summer after turmoil with their current club, but which will be a better pick-up?? To be honest, when you look at the numbers-- both are comparable to each other and you'd probably get more out of them if they were surrounded with a better support team (though Ryan has it made with Perry and Getzlaf). But the bottom line coming down to it is whether or not a team has the assets and then want to depart with those assets in order to acquire one of the other. Of course, Ryan's asking price will probably be much lower than Nash and his salary hit will be much less and the contract is shorter. All of those will be a great selling feature with the two right wings pitted against each other.

Granted, Nash is the "sexy" name and will have fans bemoan the fact that they weren't able to get him. Nash, however, seems to be only the name. We haven't seen what he can do when playing with elite level players on the NHL stage, but one can assume that if Nash has a true #1 passing center, he'd reap the benefits. The San Jose Sharks name keep popping up from the attachment that Nash and Joe Thornton have-- but that was seven years ago and who knows if the the chemistry is still there.

Moving from the forwards, the name of Jay Bouwmeester is coming up, mostly because Jay Feaster gave Dennis Wideman an insane amount of money on an insane term; thus seemingly make Bouwmeester expendable. At two years left on his contract and a $6.68M cap hit, there's probably not going to be any teams burning up Feaster's phone lines. If anything, they'll make sure he stays hampered with that contract until the 2014 trade deadline. While Bouwmeester can be a great player when he applies himself, odds are teams wouldn't want to take on his streaky play, especially not in a contract year. Of course, should Feaster just give him away, that'd be attractive to some teams. Another option is for the Flames to bury him in the minors, as he only has a NTC, but very unlikely.

Yet, the biggest name, still, is Roberto Luongo. Since the Canucks playoff run ended, many were speculating on where his next destination would be because of his inability to get past Round One after being the Western Conference representative in the Stanley Cup Finals. Of course, that helped Cory Schneider break out and get a decent re-signing for his effort, but it also shows that the Canucks are willing to let go of Luongo, who has 10 years left on his contract and will have a cap hit of $5.33M for those seasons. Plus, considering he has a wacky NTC though it all-- it makes you wonder if any team would take the flier on him or not, especially when they know he can be great at times and horrible at times.

The biggest upside for Luongo is the lack of decent free agent goalies out there for a team that needs one. Rumor has it that Luongo only wants to go to the Panthers, but whether or not they are willing to give up on Jacob Markstrom just yet is another story. Of course, with the Panthers making the playoffs last year and coming within one goal of advancing to the second round-- Luongo could be the one thing that actually makes the Panthers true contenders in the Eastern Conference. That said-- both Jose Theodore and Scott Clemmensen are under contract next year-- Clemmensen for another year after next. It'd be a hard sell for the Panthers to get yet another goalie.

So, with the summer just starting/ending for free agency, you can bet that trade talks will be heating up sooner or later. Whether or not anyone gets moved is another story and whether it happens this month or closer to training camp is yet another story. At least we'll have something to talk about this summer....I think....other than that whole CBA crap.
Posted by ScottyWazz at 8:27 AM