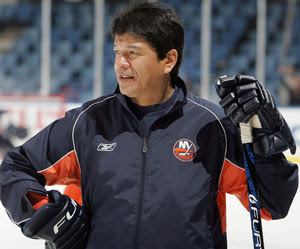 See, you can do a headline about the Islanders without using a hack "Survivor" reference. It's not that hard folks.

Anyway, that's right Ted Nolan is on his way out as coach of the Islanders as he was fired today. For some it's a shock, for others-- not so much. The clashing between Nolan and GM Garth Snow has been bubbling for some time and finally reached it's boiling point during the draft and free agency.

You see, Nolan was not consulted in any way, shape, or form when it came to the recent round of draft picks or free agent signings made by the Islanders. This was compounded on the feud between Nolan and Snow when it came to not re-signing Wade Dubielewicz, as well as going with a youth movement rather than signing veterans like Nolan would have liked.

When all is said and done, I hope you kids got a good look at Ted Nolan behind a NHL bench because it could be a while before you see him behind one again. It seems that Nolan possibly being a GM killer is being revisited with this latest tiff with Snow and the previous difference of opinion when he was in Buffalo with Darcy Regier. Though Nolan does have the ability to coach, his development of players and ability to get a team chemistry going is suspect. Yet, it seems that his shelf life is very short, as both his NHL head coaching tenures have been two seasons in duration. Now you have to wonder who will take a flyer on Nolan, most likely a junior team, but even that's not for certain.

If Nolan is able to get another NHL job, he better hope it comes with a GM tag because that could be the only way he keeps a job for more than two seasons. It's almost as if Ted Nolan is becoming the Ray Emery of the coaching ranks, a person who's too headstrong for his own good. One has to wonder if Nolan will change his ways in order to get another coaching job, but odds are he won't do such a thing-- it's not in his persona. While it's a valiant fight he's trying to put up being the way he is, odds are that's hindering his employability rather than helping him.
Posted by ScottyWazz at 11:47 AM