Feaster and Famine or The Bay Bunch At It Again 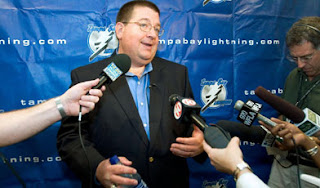 To the surprise of virtually no one, Jay Feaster and the Tampa Bay Lightning have parted ways. The writing was on the wall for Feaster first when the ownership change came to fruition and second when he really had no voice when hiring a new coach or making moves that have made the Lightning roster what it is presently. And with the new ownership pretty much playing by their own rules, I'm surprised this move didn't happen with John Tortorella's departure.

However, they discount Feaster's ability to build a great club. Once he came into the GM position in 2002, he built the team that went on to win 2004 Stanley Cup. It seemed the the Bolts club today is almost like the club that Feaster took over from Rick Dudley. That said, you have to wonder about the contracts he gave to the big three in Martin St. Louis, Vincent Lecavalier, and Brad Richards, which resulted in Richards being dealt to Dallas, as well as not leaving enough money to put towards a goalie and solid stay-at-home defenseman. Yet, could you really blame him for doing such a thing, especially considering that Richards would have gotten that much from someone else if the Bolts weren't going to give it to him.

Notwithstanding, Feaster could have made some better decisions, but that could be said for a lot of former GMs. Feaster did what he thought was good for the team for the future, though he didn't think of other aspect of the future enough to save his job. Of course, the ownership group that came into place didn't help his cause either.

Which begs the question-- who are Len and Oren going to bring into the "sideshow", as some would say. Brian Lawton is in the fold as VP of Hockey Ops, and it could be a value to him being a former agent to bring in some of his old guys into the fold. If they're going old school with coaching, why not bring in Bobby Clarke as the GM or even Mike Milbury?? Sure, the last two are very absurd....but look at what this club has done with it's head coach and tell me it's not possible.

Whatever the future brings, like I've said before-- the one thing you can't accuse the OK Hockey group of doing is not trying. They've made headway in terms of creating attention for a last place club and pulling out all the stops to keep their team in the headlines.
Posted by ScottyWazz at 8:30 PM