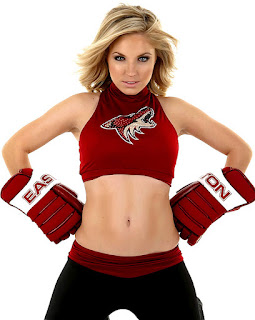 (May as well ease the commotion of these trying times with some eye candy for you Coyotes' fans.)

With all the hoopla going on between the NHL, Phoenix Coyotes, City of Glendale, and Goldwater Institute; a posted job opening on the Team Work Online board caught my eye and probably wouldn't have gotten much attention unless the circumstances didn't merit it.

The Coyotes have posted a job opening for Legal Counsel, which is something you would think they already had, especially considering the situation they are in. Personally, the fact they are posting it online seem a little....iffy to me. As Dmitry Chesnokov pointed out, it was probably to fulfill some kind of requirement to make a it a fair job search, but at the same time-- to go online for it rather than dealing with it in-house seems like something that.....well, that the Coyotes would do actually.

Plus, it wasn't posted exclusively on Jobing.com, which may upset their arena naming rights owners. But that's neither here nor there.

Another person chimed in on the fact that the fact Greg Jamison is looking for someone is a good sign. While a valid point, the fact Jamison doesn't own the team and shouldn't have a say in it is a hurdle in that argument. Considering that Jamison has yet to come up with the funding or unveil his "secret investors" to the table, that could be more of a problem right now than trying to find some kind of legal counsel-- which the NHL and their bevy of lawyers should be able to handle.

The Board of Governors will meet today to talk about the team's future, as the league is going into Year Four of controlling the Coyotes, a plan that was supposed to take a year-- two at the most. With the schedule to come out this week, you almost wonder if they're going to be two, maybe three schedules made up in lieu of what happens next to the Coyotes.

While a lot of people think that this latest move by the Goldwater Institute isn't as effective or warranted as their other moves in the past with Matthew Hulsizer, the fact the Coyotes are under the microscope means that this will get attention and may be the thing to scare off Jamison, regardless if he has the money or not to purchase the Coyotes-- it'd be his excuse to leave.

Right or wrong, I think most hockey fans, pundits, and officials are sick of this drama being put out there and unresolved for so long. More importantly, the fact the emotions of hockey fans in Phoenix and the respective relocation destinations are running high, it's almost sedistic to keep stringing them along. New legal counsel or not, this deal has to be done in some way, shape, or form-- lest we all get sick of it and try to tell them to blow it all up and act like it didn't happen in the first place.
Posted by ScottyWazz at 6:30 AM