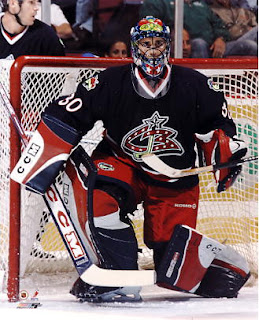 While this AGM did have some kind of prominence, it was with an expansion team. A once highly rated prospect, he was let go to the expansion team and moved onto an adventure of his own. While he didn't have the best career path, he did what he could with what was in front of him. This week, the profile of Marc Denis.

Denis' quest started in the 1992-93 season playing Midget "AAA" with Montreal-Bourassa for 26 games before moving onto the Trois-Rivieres Estacades in the 1993-94 season, putting together a 10-22-3 record in 36 games and 1-3 in the four playoff games he appeared in.

Denis started in the Major Junior ranks with the Chicoutimi Sagueneens in the 1994-95 season, playing in 32 games and putting up a 17-9-1 record and then going 4-2 in six playoff games. The 1995-96 season saw Denis get the starting role in Chicoutimi, playing in 51 games and posting a 23-22-4 record, then finishing 8-8 in 16 playoff games. Denis also played in the 1996 World Junior Championship, going 2-0-0 in this two games en route to Canada winning the Gold Medal. It was another big year for Denis in 1996-97, going 22-15-2 in 41 games, then 11-10 in 21 playoff games, as they won the QMJHL Title. The Sagueneens would go 0-3-0 in the Memorial Cup, however. Denis also played in the 1997 WJC, going 5-0-2 in seven games winning another Gold Medal. Denis was the best goaltending in the World Junior tournament. There were more awards for Denis that spring with him winning Canadian Major Junior Goalie of the Year award, as well as named to the CHL and QMJHL First All-Star Team.

Also during that 1996-97 season, Denis made his first appearance with the team that drafted him in 1996, the Colorado Avalanche, losing his first game in December of 1996. Denis also joined the AHL's Hershey Bears for the 1997 Playoffs, going 1-0 in four appearances, as the Bears would win the Calder Cup. Denis' first pro season was in the 1997-98 season with the Bears, where he would play 47 games and put up a 17-23-4 record and then 3-3 in six playoff games. In the 1998-99 season, Denis would be back in Hershey and finish up with a 20-23-5 record in 52 games and then 1-1 record in three playoff games. Denis was called up for four games with the Avalanche where he would go 1-1-1 in that span.

Back-up duty called for Denis in the 1999-2000 season, as he would be playing behind Patrick Roy. Denis would put together a 9-8-3 record in 23 appearances.

Denis signed as a free-agent in the summer of 2008 with the Montreal Canadiens, mostly playing that 2008-09 season with the AHL's Hamilton Bulldogs, playing in 46 games and finished with a 27-18-0 record and then 2-4 record in six games. Denis did play one game with the Canadiens, which was a no-decision. After a summer with no offers, Denis hung up the pads.

After his playing career, Denis would go on to become a goalie coach for the Chicoutimi Sagueneens in the 2009-10 season, while then moving over to become an analyst for RDS in Quebec.

It wasn't the easiest of rides and may not have had the best of teams, but he showed that if he does have a good team in front of him, he could be productive. Even with mediocre teams in junior, he could lead them to a league championship. The odd death-kneel was the expansion team woes, which didn't see him climb out of that issue with flying colors.
Posted by ScottyWazz at 8:00 AM