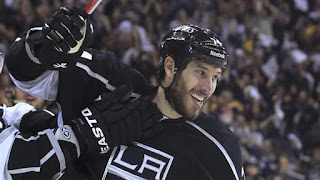 With the John Druce-esque emergence of Dwight King for the Los Angeles Kings, it offers a vast amount of King playing for both the name on the front and back, especially since they're the same. But there are a few more players who have had the same name as their team's logo and played for said team, with King being in the spotlight now due to his amazing play this playoffs.

The interesting part of it all is that King is the only player with that surname to play for Los Angeles. There have been ten players and one coach with the last name King, Dwight is the only one to play for the Kings; making it fun to deal with, but also redundant.

While King is plying his trade in the NHL, the London Knights in the OHL have Jared Knight, the overage forward from Battle Creek, Michigan. Knight put up a point-per-game mark during the regular season (26g, 26a in 52 games) while chipping in four goals and eight points in 15 playoff games. The Boston Bruin second-round will be looking to move his talents to the pros next season, probably in the AHL to start off, but moving upward. Sadly, Knight will have to leave the team moniker fun-fact behind as it's all Bruins from this point forward.

Yet, even while those last names are fantastically fun to deal with-- when you have an entire name that's the team's nickname-- then you know you have something.

The Brandon Wheat Kings of the WHL had a player from Brandon play on their team....who's name was Wheaton King. Whether or not the family planned it that way to pay homage to the local junior hockey team, but the fact he was able to make it to the WHL and be able to play (albeit only in 48 games over two season), will forever cement this player as one of the most unique names to be associated with a hockey club. King did play three games with the Moose Jaw Warriors this past season, but this could be the last we have hear of the young King, as with many major junior players, he may fade away without getting the stardom he thought he could have.

All in all, the NHL really doesn't give much leeway for players to have the same name as their logo, but luckily-- you do have a few gems out there, which will cause a little bit of notice on that player; especially if they start to make their mark on the playoff stage.
Posted by ScottyWazz at 9:02 AM