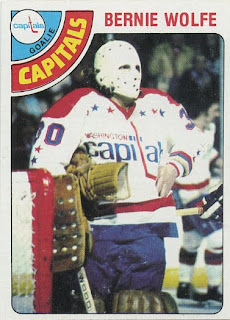 While we usually do players with unusually short careers, this week's AGM is very unusually short. Coming from utter obscurity to splitting duties for one of the worse teams in the league to retiring to trying to be signed again for an expansion draft to financial planner. With the revelation that Bruins captain Zdeno Chara is now a certified financial planner, this guy could add him him to his stable if need be. This week, the profile of Bernie Wolfe.

Wolfe moved onto the pro ranks, being signed by the expansion Washington Capitals in October of 1974, but would be playing in the North American League for the Maine Nordiques, going 19-17-1 in 40 games. At the tail-end of the 1974-75 season, Wolfe would be called up to the Richmond Robins of the AHL, finishing with a 6-7-2 record in 17 games, the going 3-4 in the playoffs.

Wolfe would start the 1977-78 season with the AHL's Hershey Bears, winning all three games he appeared in. He would get the call-up to the Caps and would appear in 25 games for Washington, but only record a dismal 4-14-4 record. The 1978-79 season, Wolfe took one last kick at the can for the Caps, but after going 4-9-1 in 18 games-- Wolfe decided to move on from his hockey career and into something else.

The good thing about Wolfe is that he planned out his future well. He started his own financial planning practice in the Washington DC area and earned his Certified Financial Planner designation in 1981. As he continues to run Bernard R. Wolfe and Associates in Chevy Chase, Maryland; Wolfe has been able to create a very successful life after hockey. His firm was recognized by the Washingtonian Magazine in 2009 and 2010 as one of the top financial firms in the area, which was voted amongst his peers.

An interesting note, however, is that Wolfe had a short, short "comeback." The Capitals had to release one of their goalies for the 1992 Expansion Draft, but didn't feel like it. They scrambled to find a dispensable goalie in order to keep the ones they had. The Caps tried to sign Wolfe, but the NHL had denied it as Wolfe had been retired for over a decade at that point. One of the owners of the expansion teams, Phil Esposito of the Tampa Bay Lightning, had this great quote about Wolfe, saying: "I didn't just pay $50 million for Bernie Wolfe. He wasn't any good when I played against him." The Caps then signed Steve Weeks just to release him.

While he only played 120 games, Wolfe had the wherewithal to actually keep his mind going and look to the future beyond hockey. Lucky for him, it worked out amazingly and he's got himself a stellar life going for himself now. Maybe he could teach Chara a thing or two when he needs a helping hand.
Posted by ScottyWazz at 8:00 AM