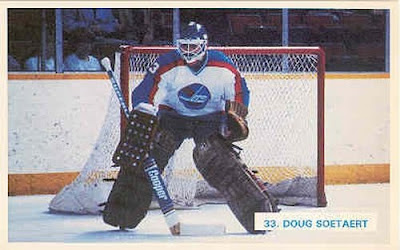 It's a good thing to have parents who are into the game, even if it only means storing the local arena's gear in the basement of the house. However, if not for that, this week's AGM probably would have never been interested in the position enough to make it to this list. This week, the profile of Doug Soetaert.

Growing up in Edmonton, Soetaert's father was in charge of the community's equipment, including goal gear. That allowed Soetaert to put on the gear at will have his buddies shoot puck at him. That helped a lot, as he was a solid junior goalie from the 1971-72 season until the 1974-75 season playing with the Edmonton Oil Kings, where he would play 184 games in four seasons, compiling six shutouts in that span and 4.05 GAA. Also, Soetaert would be able to get onto the 1975 World Junior team, which was compiled of an All-Star team from the Western Canadian Junior League.

Soetaert played well enough to be drafted by the New York Rangers in the second round of the 1975 Entry Draft. The 1975-76 had Soetaert in the AHL with the Providence Reds, playing in 16 games and putting up a 6-9-1 record, while also playing eight games with the Rangers and finishing with a 2-2-0 record. It was another split year for Soetaert in the 1976-77 season, playing 16 games with the AHL's New Haven Nighthawks with a 6-9-0 record and then 12 games with the Rangers, ending there with a 3-4-1 record. New Haven is where Soetaert would play the majority of the 1977-78 season, playing in 36 games and compiling an even 16-16-6 record there; plus a 8-7 record in 15 playoff games. Soetaert also did get the call for six games with the Rangers-- another even year at 2-2-2.

The 1978-79 season had Soetaert as the back-up for the Rangers the majority of the year, going 5-7-3 in his 17 appearances, but did play in three games in New Haven at 2-1-0 clip. Soetaert would return to New Haven with the 1979-80 season, appearing 32 times with a 17-18-5 record to his name, with a playoff record of 5-3. Soetaert would fair better with the Rangers with a 5-2-0 record in eight appearances there. That allowed Soetaert to spend the 1980-81 season primarily in the Big Apple, playing in 39 games on Broadway and finishing up with a solid 16-16-7 record. Soetaert also touched back in New Haven, finishing with a 5-5-1 record in his 12 games played.

Before the 1984-85 season, the Jets traded Soetaert to the Montreal Canadiens for Mark Holden. That first season with Montreal, Soetaert when 14-9-4 in 28 appearances backing up a young goalie named Patrick Roy. The 1985-86 season saw Soetaert do the same thing, playing in only 23 games and finishing with a 11-7-2 record and being along for the ride as the Canadiens won the Stanley Cup that spring.

The 1986-87 season had Soetaert return the Rangers as a free agent, where he would play 13 games with a dismal 2-7-2 record. It would be Soetaert's last, as he would retire after that season.

After his career, Soetaert went into the front office roles many former players do. Soetaert would first work with the IHL's Kansas City Blades for 11 seasons as a coach and GM; helping them win a Turner Cup and being named Executive of the Year in the IHL in 1992. Soetaert would also build up a solid junior team in the Everett, Washington with the Everett Silvertips, starting from the ground up and putting a solid contender in the WHL from the start. While he did take a small detour to help the Calgary Flames in their new AHL team (Omaha Ak-Sar-Ben Knights), but would only stay there for a season before returning to Everett as a GM, where he is today.

It was from the basement to Broadway for Soetaert and he did have quite the career. He did what he could in order to show his wears for the team he was drafted with, but also made notable strides late in his career, where he would also be witness to the start of a great goalie's career and winning a Cup ring in the process. He made a solid life for himself in the hockey world after his playing career is well. You can't really see much of a downside, if only the happenstance of things getting jammed up a bit stifling some progress.
Posted by ScottyWazz at 8:00 AM