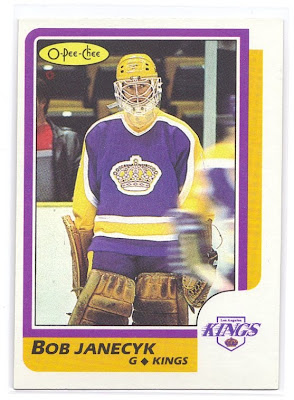 It's not often where we see a goalie make it to the NHL from a Division II NCAA school, but that's exactly what we have in this instance. While he did stay at home in one of the more unlikely college markets, he attained most of his playing time and notoriety. This week, the profile of Bob Janecyk.

The long road for Janecyk started in his hometown of Chicago, Illinois; where he would play four years with Chicago State University from the 1975-76 season until the 1978-79 season. Janecyk would get All-American honors in 1976, 1977, and 1978.

Janecyk would move to the professional ranks during the 1979-80 season, where he would start with the Chicago Cardinals of the Continental Hockey League for a single game, before moving to the IHL to first play two games with the Flint Generals, but would make his name for 40 games with the Fort Wayne Komets.

The summer of 1980, Janecyk was signed by the Chicago Blackhawks and spent the 1980-81 season in the AHL with the New Brunswick Hawks, going 11-18-1 in 34 games. Janecyk would stick with New Brunswick for the 1981-82 season, putting up an impressive 32-13-7 record in the regular season and going 11-2 in 14 playoff games, helping them win the Calder Cup. Janecyk won the Hap Holmes trophy for fewest goals-against that season, as well as getting First Team All-Star honors. The 1982-83 season had Janecyk move to the Springfield Indians of the AHL, going 19-24-4 in 47 appearances, as well as getting First Team All-Star honors that season as well. Janecyk was back in Springfield for the 1983-84 season, playing in 30 games and finishing with a 14-11-4 record. Janecyk also spent eight games with the Chicago Blackhawks, going 2-3-1 for his hometown team.

During the Entry Draft of 1984, Janecyk and three draft picks from the Blackhawks (which included future Baseball Hall of Famer Tom Glavine) to the Los Angeles Kings for two draft picks in return. That 1984-85 season had Janecyk thrown into the starting role for the Kings quickly, as he would play 51 games and compiling a 22-21-8 record, then going 0-3 in three playoff games. Janecyk only saw 38 games of playing time in the 1985-86 season, finishing with a 14-16-4 record. With the Kings bringing in Daren Eliot as a back-up in the 1986-87 season, Janecyk only saw seven games of action, going 4-3-0. Janecyk played in the AHL for the New Haven Nighthawks for the bulk of the 1987-88 season, going 19-13-3 in 37 appearances, though he would get the call back to Los Angeles for five games, having a 1-4-0 record to show for it. Janecyk would be back in New Haven for the 1988-89 season, posting a 14-13-6 record in 34 games, as well as getting to play in one game for the Kings; a no-decision. After that year, Janecyk hung up his pads.

After retiring, Janecyk got into the management game and is currently a scout for the Ottawa Senators.

He stayed close to home when he started his career, but it could be the most unlikeliest of career paths taken of all these AGMs that have been done. Though Janecyk was pushed out towards the end, he did what he could to keep his spot in the NHL. If nothing else, he played for his hometown team, which something not many players can do in their careers.
Posted by ScottyWazz at 8:00 AM