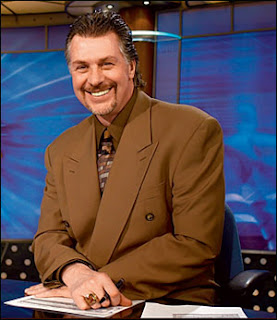 Okay, that could be the shortest and least in-depth blog post ever if I were to quit right there, but regardless of the explanation I give, it'll all go back to that point.

If you haven't heard, the Tampa Bay Lightning signed Barry "The Mullet" Melrose to be their new head coach. A man who hasn't been in the league in 13 years, a man who has always been better suited to be an analyst than a head coach has been named head coach of a NHL team over the likes of Bob Hartley, Marc Crawford, and Joel Quenneville. If you can't figure out why the Bolts did this-- let me spell it out for you:

That's right kids, in an attempt for the Bolts to get more interest from the NHL and from their own fans in Tampa, they hired one of the most recognizable hairstyles to be their bench boss. This is a team who is four years removed from a Stanley Cup championship and they are are in such dire straits that they need to go the route of hiring due to recognition rather than qualifications. Way to start off on the right foot new ownership group.

But, what can you do?? You have to give Hollywood producer and Bolts co-owner Oren Koules some props for creating a buzz in the hockey world off the hop by getting Melrose back behind the bench. What better way to draw attention than making it with a move like this. Forget they drafted first overall, forget they have a bevy of talent they could market...you need Melrose to be the guy to guide this team to drunken mediocre.

Now, this is not because I have something big against Melrose. I think he's a great analyst and I think a personality that could be big asset to American coverage of the NHL on TV. It's just that he was choice based on that and not his history. Melrose is 82-103-31 in two-and-a-half seasons with the LA Kings, which is defining moment is taking the Kings to the Cup finals. And sure, Melrose has a Calder Cup and Memorial Cup to his name-- but that was eons ago. The game is new, the caliber of players are better, and as a whole-- I think this move could be more of an albatross for the Bolts than a god-send.

If you want to bring a team back into the spotlight, the Bolts needed to get a coach who will actually get the job done and get the team back to prominence by winning and making waves that way. Someone like Joel Quenneville would have done the same job that Melrose could do, but better and in a quicker turnaround time. It's Hockey Personnel 101 and maybe someone should give the new Tampa owners a crash-course on this subject.

In the end, the only good thing to take away from this is that ESPN could be knocking on my door to give me a contract offer to be their new studio analyst. Hey guys-- Facebook me and we'll talk.
Posted by ScottyWazz at 7:57 PM