Baltimore Hockey History: The Longevity of the Clippers 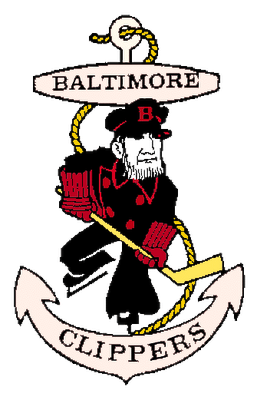 While I mentioned in a previous post that the Winnipeg Jets moniker shouldn't be revived in the NHL again, I never said that them bringing it back in another league is a bad thing. Such is the case with our latest BHH installment of the Baltimore Clippers. The Clippers name was synonymous with the Baltimore hockey scene for 21 seasons, including two half-seasons in 1949-50 and 1974-75, and the team name was through three leagues in those 21 seasons. The name itself was something unique to Baltimore, as it was also the name give to sailing ships; most of which used Baltimore as a port.

As a team, the Clippers first came to be in the 1946-47 season in the Eastern Hockey League and did the expected and finished last (18-30-8) in the four-team league in their inaugural season. They seemed to make it at least competitive, as they had four 20-goal scorers in Bill Hannon (41 goals), Ed Vigneau (29), Wendell "Frank" MacIntosh (24), and Jack Stoddard (22). Hannon, Vigneau, and MacIntosh were also top-1o in points, as Pete Taillefer was second in the league in PIMs with 116. It was quite the turnaround for the Clippers in the 1947-48 season, with the Clippers winning the regular season title with a 31-16-1 record. That Clippers team was stacked with four 30-goal scorers in Charlie Knox (52), James Muldoon (36), Billy Purcell (36), and George Hayes (33). They also rolled big in the points with seven of the top-10 being Clippers: Knox, Dave Maguire, Muldoon, Hayes, Purcell, Nestor "Gerry" Lubeck, and Jack "Danny" Nixon. On top of all of that, Nixon and Kenneth Schwartz were the top two for the Clippers and EHL in PIMs with a combined 286 PIMs (182 and 104 respectively). However, success was fleeting, even back in those days. The EHL closed up shop for the 1948-49 season, because of lack of teams. When it returned in the 1949-50 season, the league had eight teams; including the Clippers. The Clippers wouldn't last long in the EHL, playing only 12 games (4-8-0) before folding up mid-season due to financial concerns on the team.

While the team would lay dormant, they would make a return to the league in the 1954-55 season in almost triumph fashion. While the league had only five teams, the competition was tight. The Clippers would finish third in the regular season (22-23-2), but where able to have the league's leading scorer, Herve Lalonde (22g, 50a). They made the playoffs and beat the Clinton Comets three-games to one in the first round, but got trounced by the Washington Lions in the Finals, getting swept in four games and outscored 21-8. Yet, more fleeting fame with the Clippers in the 1955-56 season. Not only did they fall from grace with mediocrity (23-40-1), but to add insult to injury, the team had to move to Charlotte, North Carolina for it's last five games because the Clippers home rink burnt to the ground. What's worse is that the next season, the Charlotte Clippers, comprised of the old Baltimore Clippers, won the EHL championship. No rink and a championship team in another city....awesome for Baltimore hockey fans for sure.

Luckily, the city found it in their heart to build a new "Civic Center" for the many events they wanted to draw for the downtown core and build up the Baltimore Civic Center. It opened in 1962, which incidentally coincided with the return of the Baltimore Clippers name to the AHL in the 1962-63 season. It was a solid reintroduction, as the Clippers were led offensively by Dave Creighton (24g, 48a) and were able to make the playoffs with a 35-30-7 record, but lost in the first round of the playoffs. It was another so-so year for the 1963-64 season, as the Clippers wound up out of the playoffs with a 32-37-3 record. The 1964-65 season was a solid one as the Clippers had the third-most goals in the league for the season with four players over 25 goals and Gord Labossiere 9th in league scoring (38g, 41a). However, it wasn't enough as they were dropped in the first round once again.

While the 1965-66 season was a lean one (27-43-2), the 1966-67 season started a string of consistency for the Clippers, as they made the playoffs five of the next six seasons. What was even more impressive with the string is that the Clippers went through five coaches in that time span-- Terry Reardon, Aldo Guidolin (who was the second Clippers AHL coach), Rudy Migay, and Jim Morrison. The Clippers would eventually settle on a co-coach system, which helped lead them to the Calder Cup finals in the 1971-72 season with Reardon and Morrison behind the bench. That Finals, the Clippers went down in six games to the dominate Nova Scotia Voyageurs, who outscored the Clippers 21-8. History in a final repeating itself. Much like history, the Clippers AHL story was almost the same of its EHL predecessor. While the Clippers kept the co-coach gimmick going with Reardon and Morrison for two more years and Kent Douglas the next two, the Clippers would miss out on the playoffs three out of the four years.

However, the 1974-75 season was something of an interesting situation. While the Clippers were only 14-22-10 in their 46 games; they folded up mid-season. The reason for it is that the owners of the WHA's Michigan Stags tapped Baltimore as their new place of business and would rename the team the Blades. The Blades only played 17 games in the Baltimore Arena before finally folding up shop for good. The Clippers would come back for one more AHL season in the 1975-76 season before closing that chapter of their history.

The 1976-77 season saw the Clippers name back, this time in the Southern Hockey League. It was a gongshow, through and through as the league folded mid-season with the Clippers going 21-24-2 in their 47 games. The Clippers name would lay dormant again until the 1979-80 season when they came back in the new Eastern Hockey League with soon-to-be legendary Baltimore coach Gene Ubriaco behind the bench for the Clippers. The first year, the Clippers had a solid team with a 41-25-4 record, finishing third in the league in the regular season. That year, they had Warren Young, who was tied for first in goals (53) and outright second in points (106). Young had 23 more points than anyone on the team. The 1980-81 season was another downfall for the Clippers as they dropped to 28-36-7 and only had a small time in the playoffs. After that season, the EHL and Clippers would fold up for the last time.